Inglewood Mayor James Butts envisions a future in which people on every flight landing at LAX look out the small cabin windows and see a gigantic multilayered sports entertainment district – a city within a city – lit up like Las Vegas.

With the NFL choosing the Hollywood Park site for the return of the Rams to Los Angeles, the most exciting development in Southern California may be taking place in the City of Inglewood.

Three student organizations at the USC Price School of Public Policy – the Associated Students of Planning and Development, International City/County Management Association, and Southern California Policy Review – joined with the USC Bedrosian Center on Governance to host an April 6 discussion on the future of Inglewood.

“There’s no project we’re going to see in this part of the country that’s going to be more significant, more challenging, and perhaps more transformational from a governance perspective,” said Raphael Bostic, USC Price professor and holder of the Bedrosian Chair. “It can potentially be a game-changer in terms of what people in Inglewood are able do to in their community and what will happen in the southern part of the Los Angeles region.” 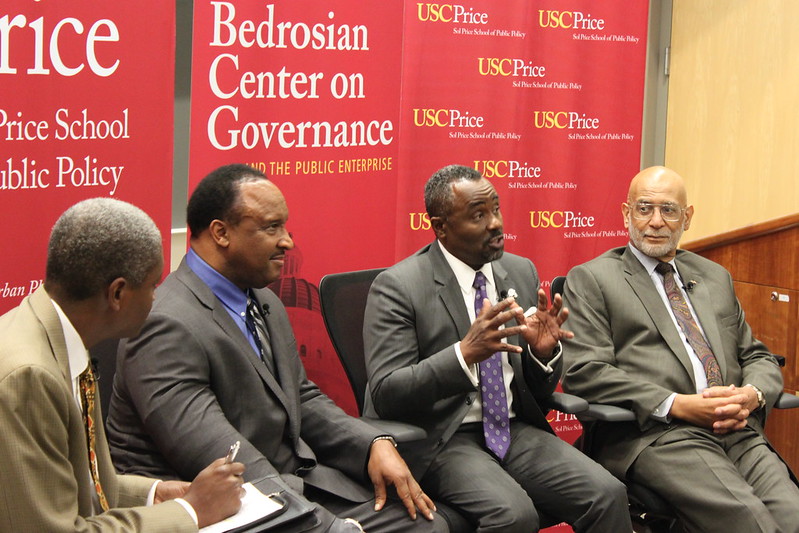 Such an exciting future for Inglewood seemed improbable five years ago when Butts took office. The city had an $18.6 million structural deficit.

Butts knew that the city had great potential because of its prime location in the middle of four freeways and proximity to LAX. But it was difficult to draw investors, according to Butts, because of issues including political and fiscal challenges and problems with crime.

After improving the city’s foundation, he was able to attract Madison Square Garden to take over the Forum, once home to the Lakers and Kings. The revived arena turned into No. 1 concert venue in Los Angeles, setting the stage for the NFL’s return.

“Cities that depend on property taxes and sales tax get by in the best economy and struggle with every recession or downturn for the economy,” Butts said. “So when I came back to Inglewood, I said the first thing that has to happen is we have to get an entertainment anchor. If the Forum doesn’t prove to people we’re worth investing in, [Rams owner] Stan Kroenke never comes here. Now it’s the NFL project that lifts us to national status.”

The project – which will also include retail, commercial and residential space – has taken more than a decade to get to this stage, an unusual length of time for a company to remain patient. Developer Wilson Meany bought the property in 2005, but took four years to get approval from the Inglewood city council; and by that time, it was the height of the recession.

When the project was finally ready to move forward in 2014, Kroenke purchased the 60 acres next to their 238 acres and reached out to partner with Wilson Meany. However, the developer wasn’t receptive at first. There had been 21 proposals over the past 20 years to bring an NFL team to Los Angeles.

“He went to the mayor because our folks wouldn’t return the phone call,” McCallum said. “We had previously had everyone from the NFL visit us wanting to have a stadium on the site but no one had the wherewithal to transact. We finally connected, and he came through with a grand vision to make this a joint venture.” 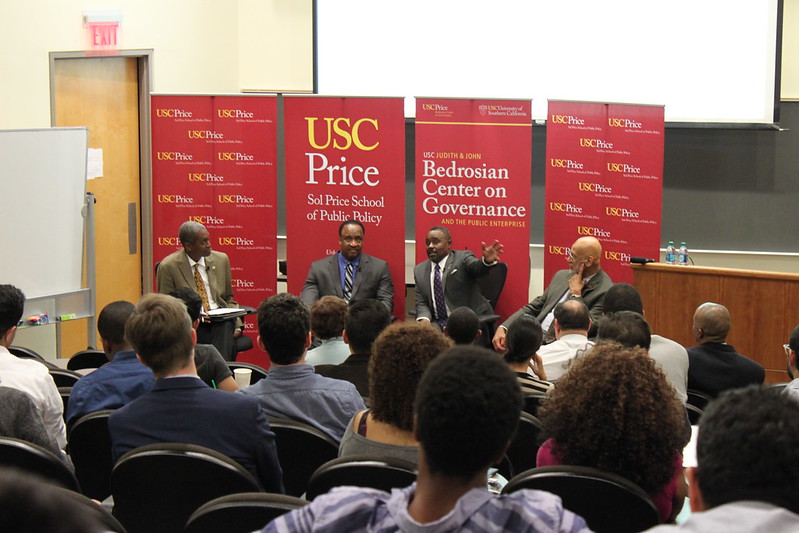 Last fall, Graves focused his graduate-level course in community planning on Inglewood, even before the NFL decision had been made. He saw other key developments in the area such as the construction of the Crenshaw/LAX transit project.

Connecting the Hollywood Park development to this rail line is one of the most important pieces to Inglewood’s future. Initially, this 1.5-mile gap will be bridged with shuttle systems, a bus route and a dedicated Uber stop at the complex. Butts said the city is pursuing a $300,000 grant to explore more permanent solutions.

“Much of planning and public policy is reactive,” Graves said. “Some action-forcing event occurs, and the public institution or company has to react. Inglewood is in an enviable position now with good things happening throughout, but a very challenging position to sort it all out and spread those benefits beyond the community.”

Bostic gave credit to USC Price students for putting the event together.

“The idea arose last fall in talking to some student organizations about having an interdisciplinary panel focusing on one project that encompasses everything under the school,” said Helen Wang, editor in chief of the Southern California Policy Review. “We also wanted to talk about a specific, real-time project that will impact Los Angeles and the cities around it.”