Can data build a better L.A.?

Our Faculty ask “Can data build a better L.A.?” 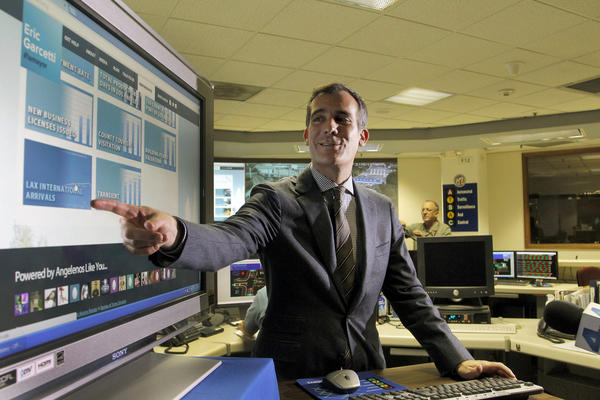 Los Angeles Mayor Eric Garcetti, marks his 100th day in office with a sneak peek of his city government “performance metric” beta website, which will be used to measure the progress and performance of city departments, during a news conference inside the Automated Traffic Surveillance and Control Center in Los Angeles. (Nick Ut / Associated Press / October 8, 2013)

And a bit earlier this year, we welcomed Nate Silver to discuss the importance of data in communicating information: “We want to see relationships and connections that allow us to make better decisions and predictions going forward,” Silver said. “I’m far from the best communicator in the world, and I’m far from the best statistician in the world, but that overlap of skills is what characterizes FiveThirtyEight. It’s hard to find people who can both communicate and think in a credible way about numbers and data.”