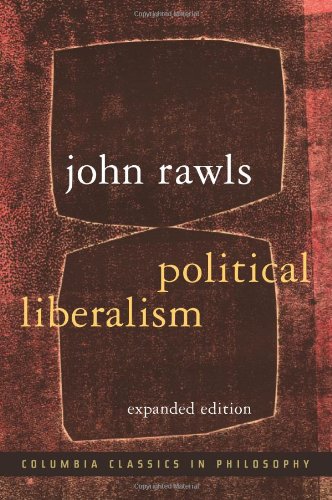 I recall when Rawls’s Theory of Justice appeared. It was a thick book, and I was not philosophically sophisticated. But its main model, the original position, was appealing if not realistic. It was Kantian but with a modern game-theoretic twist. The idea that justice was a matter of fairness, where of course one had to understand what one meant by fairness, seemed sensible. I could not appreciate just what would be controversial philosophically, since I was not in that business.

On the other hand, it was clear to many reviewers that it is demanding too much for us to be in the original position. We differ too much in our deepest commitments, often religious or political, for us to reliably place ourselves in a position where our most fundamental constitutive beliefs are put aside.

In Political Liberalism, Rawls has tried to complement Theory, giving an account how we might have a society where fairness is just one of the conceptions of fairness. Toleration plays a large role, as does our willingness to be bound together for the sake of pursuing our differences. The work is not easy reading, and I did not read it beginning to end. Rawls makes clear the difficulties and criticisms he is trying to respond to, responding as does a philosopher with attention to consistency and coherence. I would suggest that the reader start with the fourth part of this Expanded Paperback edition, an article entitled “The Idea of Public Reason Revisited.” Rawls believes this article represents the clearest statement of his position. Along the way earlier, he responds to H. L. A. Hart, and to J. Habermas, in great detail.

The basic point is that in this volume a political conception of justice encloses a nice philosophical one of the earlier volume and other conceptions as well. In effect, thinking your way to justice has to yield to dealing with others in your community or nation, a political dealing, where you have to make room for each other. I am struck by the shift from moral philosophy to political theory.

So, how to recommend a book I don’t expect you to read? Do read the introductions at the beginning. Do read the last part. Both are not too long. And do read what you can take of the responses to Hart and to Habermas, for they will help you see the work in a larger context of thinking. I dip in almost randomly, since the only way I will understand this book is by seeing its many facets rather than appreciating its coherent logic. It’s embarrassing for a professor to admit this. (Maybe I should read the Wikipedia article about the book—although all that has done is remind me that pluralism, overlapping consensuses, and public reason are central notions. That is more or less what I have said above.)