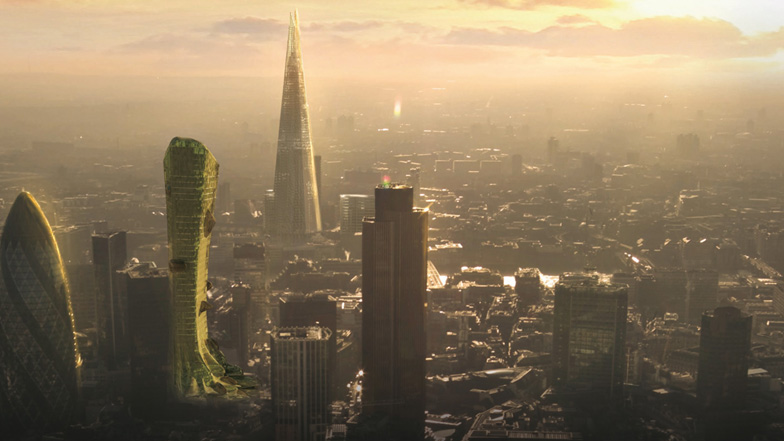 What could Southern California’s urban metropolis look like 20 years? Picture algae encased skyscrapers that absorb carbon dioxide and organically recycle water from within their walls. Imagine community hospitals that never use a single kilowatt-hour of energy from the utility grid.

Envision an international airport that recycles 417 million gallons of water on-site each year, while keeping 1.5 billion gallons of jet fuel out of adjacent beaches and bays. Conceptualize offices and homes that are built to maximize health, minimize consumption, and withstand earthquakes 3 times the magnitude of ‘94 Northridge quake. According the practitioners and innovators at The Engineering and Design firm, ARUP, these possibilities will define how we live in Southern California over the next 50 years. The primary question is how can do we get there?

In January, I was able to attend ARUP’s annual symposium on “The Re-engineering of Southern California: Research Driven Practices for Smart Cities.” ARUP’s practitioners unveiled solutions to climate change, pollution, and water ecology challenges among an audience of policy and planning practitioners. While the day was primarily focused on fantastic visualizations of pilot projects and new technology, the theories behind these presentations were steeped in urgency for collaboration among the design and policy worlds. There was every acknowledgement of complexity, yet an equal, if not louder, exclamation for innovation and action. As engineer and LEED Green Associate Anthony Kirby said, “the solutions exist now, it’s just a matter of time until we use them.” One of the most exciting presentations featured a closer look at a zero-energy, zero- carbon, zero-waste hospital. ARUP and several of their research partners found that heating and cooling are the primary energy concerns for hospitals today. They also debunked the myth of costly internal equipment as the main culprit of energy costs, and found that hospital MRI machines accounted for less than 1% of the total hospital energy usage in their particular case study. In addition, they discovered that the optimal placement of a hospital facility among the solar canopy, in conjunction with identifying the correct window to wall ratio, and LED lighting installation were the fundamental avenues for reducing hospital energy consumption. The presenter Architect Russell Fortmeyer stated that, “By reducing energy loads and adding solar panels we could actually create a hospital that eventually gives back to the utility grid… which is huge leap considering that hospitals today, along with fast food restaurants, are the most energy intensive building types in our communities.” Several international cities already have construction plans for net-positive buildings, such as the City of Masdar Headquarters in Abu Dhabi. That particular groundbreaking building design will be the first carbon-neutral, zero-waste facility of a large magnitude to actually contribute energy back to the city’s utility grid. The southern California region possesses several of the same characteristics central to the design of the Masdar project- namely the fact that both regions have more sunlight than would ever be required to power their entire urban metros from renewable sources. Fortmeyer insisted that by 2015, “ it will be cheaper to install PV solar panels then to connect a new building to the existing utility grid in the United States.”

Another exciting moment occurred during the water ecology session with Sustainability Consultants, Anthony Kirby and Rowan Jones explained the mechanics behind Living Machine Water Purification and Reuse Systems, which are essentially hydroponic planters and parks that purify and store non-potable water for reuse. These facilities can be deposited indoors or outdoors and provide the ideal excuse for lush pockets of green space peppered among an urban concrete jungle. San Francisco, Greensboro and several cities in Vermont have already implemented large-scale organic purification and water reuse facilities some of which can process about 900,000 tons of water annually and have a project payback of roughly 15 years, a little too long for most commercial investment at this point, but that turnaround will decrease as the cost of water in California skyrockets over the next 10 years.

Robert Freeman, the Environmental Director for Los Angeles World Airports (LAWA) chimed in to place some of these amazing innovations in context through a brief presentation about the structural challenges at Los Angeles International Airport (LAX). Despite the abysmal drought situation and rising water prices in California, many of the public facilities are so outdated, they fail to recycle or reuse any water at all. LAX lacks a large onsite water recycling system, but it uses 417 million gallons of water each year. That is about 7.4 gallons for every passenger, but the large majority of this water is not used as potable drinking water. Onsite recycling could allow about 85% of this water to become reusable on a daily basis, however more than 1,000 feet of additional underground pipeline would be necessary to achieve this feat. This would require cooperation from The Los Angeles Department of Water and Power (DWP), and a large funding source from either LAX or DWP. However, the permitting process alone would be extremely costly take several years.

Similarly, out of Southern California Edison’s entire energy portfolio less than 10% is derived from solar energy even though the cost of solar panels have decreased by 75% since 2008. In contrast, Wall Street invested roughly 13 billion dollars into solar panel installation projects in 2013, ten times more than they invested in 2012. To put the figurative nail in California’s solar innovation coffin, Edison International is currently pushing to restructure energy rates so that solar users would pay a small fee to subsidize wholesale energy purchases and grid maintenance. At the provider level this looks to be the only solution, but in the context of progress, innovation and abating pollution this would completely discourage progress at the most basic consumer level.

Cooperation among innovators, designers, architects, planners and policy makers is bright idea if the structural governance systems that currently exist could act as an ombudsman for this type of partnership. Events like ARUP’s conference bridge the design and policy worlds in terms of starting a dialogue, but a dialogue goes limp without vision and leadership. Its currently unclear as to whether or not any entity, official, or public body can effectively govern such a tumultuous process? Consequently, the ideas of moving from a 1960’s California landscape, to a sustainable urban oasis is still punctuated with a question mark, even though it is altogether possible. Doug Noble, The Chair of The USC Architecture Ph.D. Program and the final presenter urged us all to remember the conference’s lessons of addressing resource scarcity through sustainability. Yet it hardly seems that remembering sufficient where governance and leadership are lacking.