On January 1 of this year, the country’s most eagerly anticipated law took effect in Colorado. Starting on New Year’s Day, aficionados flocked to new stores where, for the first time in the nation’s history, marijuana was legally available for purchase to state residents. (Washington voters also approved marijuana legislation in 2012, though implementation won’t start until for another couple months.) While the new law has been a boon to headline writers, the implementation of the new law has raised a host of interesting considerations for leaders at the local and national level. 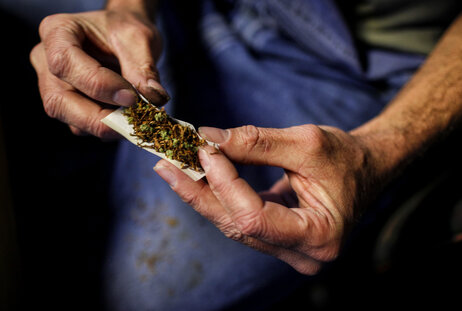 A customer rolls a joint made of half marijuana and half tobacco to smoke inside of Frankie Sports Bar and Grill in Olympia, Wash., in December 2012. (Image credit: Nick Adams/Reuters/Landov)

On the ground in Colorado, the implementation of the landmark law has varied widely across the state. Elected officials in 56 counties and cities have chosen not to allow sales of recreational marijuana, limiting actual sale of recreational marijuana to just a handful of municipalities and areas. In Washington, government officials are struggling to iron out the details of a new marketplace for legalized marijuana, and an important part yet to be determined also rests on how state law will work with local rules. Much like Colorado, Washington cities such as Yakima and Wenatchee and Pierce County have banned marijuana businesses, an action that is legal under Washington law that allows prohibitive regulatory restrictions in the name of public safety, health, or welfare, according to Washington Attorney General Bob Ferguson. Advocates of the law do worry that the moratoriums will prevent the state from achieving revenue expectations outlined in the legislation and encourage the continuation of existing black markets for the drug. In Washington the roll-out of the marijuana law is also complicated by the state’s relationship with 29 Native American tribes, each with tribal courts that are able to prohibit implementation, pending challenges in state court.

The heightened tension over governance has even brought forth reminders of another era when the gates of prohibition were raised and governance attitudes diverged widely:

[T]he fight also signals a larger battle over the future of legal marijuana: whether it will be a national industry providing near-universal access, or a patchwork system with isolated islands of mainly urban sales. To some partisans, the debate has echoes to the post-Prohibition era, when “dry towns” emerged in some states in response to legalized alcohol.

The marijuana experiment in Colorado and Washington faces stiff challenges from not only local institutional control and implementation, including creating mechanisms to prevent marijuana from reaching minors or being accessed by residents of nearby states, but also from a conflicted relationship with federal entities. The federal response to state-sponsored marijuana legalization efforts has varied widely. Some actors have adopted a more circumspect wait-and-see approach while others are actively agitating for greater federal oversight. President Barack Obama recently added fuel to the fire when he downplayed marijuana’s dangers in a recent interview with the New Yorker, inviting a sharp response from the nation’s drug czar about the administration’s contradictory messages on drugs. But across the board, the implementation of marijuana legalization at the state level is fraught with uncertain interactions with federal laws, from IRS rules that deny marijuana businesses from writing off business expenses (a major way for many businesses to control costs) to preventing marijuana businesses from opening up bank accounts. Though U.S. Attorney General Eric Holder recently announced an easing in federal banking regulations for marijuana dispensaries, the interaction between federal and state remains ambiguous at best, with lots of questions remaining on the oversight of marijuana-related food products, highway safety, and marijuana in schools, among others. However, with states from New York to Florida and Alaska considering marijuana-related laws, this may be the year of marijuana legalization, proof that efforts to reform marijuana laws aren’t just going up in smoke.