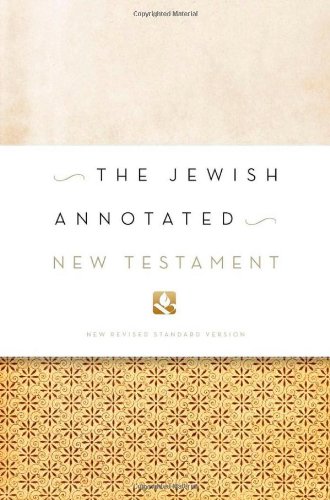 Most Bibles, Hebrew or Catholic or Protestant or…, have annotations and explanations. In general, those scholia or commentary are theological and sectarian, although sometimes they are academic. What we call the New Testament is in essence a Jewish work, since it is surely the case that the Gospels and many of the Letters were written when what we now call Christianity was a Jewish sect, among other Jewish sects. This book is the first Jewish commentary on the New Testament, and its aim is to be academic rather than theological or sectarian. There is a series of additional essays about Judaism around the time of Christ, and modern misunderstandings of that time. For modern day Christians, the commentary will be a revelation, putting their Bible into its historical context while staying out of many sectarian conflicts among the various Christian theologies. I wish there were a similar commentary for the Koran, since it too is an Abrahamic religion.

For example, if you want to understand Paul, you have to see him as a particular kind of Jew of his time. The same for Jesus, as a prophet of his time. The Letters are written much in the same vein that we have serious evangelical endeavors today. As far as I can tell, no Christian would change their religious commitments in using this commentary. But it might change some of the claims they make about what the Bible says. I would imagine that originalist interpreters of the US Constitutions would be quite interested in this commentary, and it would be terrific to have such a commentary on the US Constitution–although that surely exists among the legal texts.

Why now, at last? I suspect the rise of modern Jewish scholarship in the university, outside the rabbinic world, allows for such an effort.